Adidas against sexual tourism: it’s the request of Brazilian Tourism Board for the next Wold Cup 2014 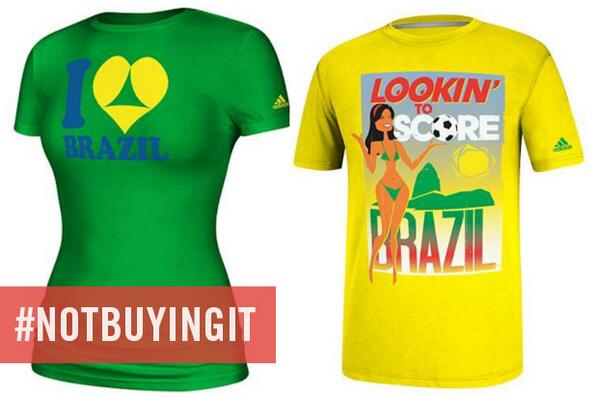 How very original. Adidas released–and has now pulled–these two new t-shirts to promote the upcoming World Cup in Brazil. Get it? Because Brazilian women are oh-so-sexy and obviously exist for your viewing pleasure. In fact, you can go ahead and think of the entire country as–literally–one big piece of ass.

And it’s not just that these tees play on sexist, racist stereotypes of exotic Latina women. ‘Looking to score?’ is not just a hypothetical play on words here. While there’s little evidence to support the oft-repeated myth that sex trafficking increases around large sporting events, sex tourism is popular in Brazil and there are concerns that the flood of tourist that the World Cup attracts will exacerbate the problem of child sex trafficking in the country. The head of the Brazilian Tourism Board Flávio Dino was not pleased. ‘We don’t accept that the World Cup be used for illegal practices, like so-called sexual tourism,’ he told O Globo. ‘We ask that Adidas put a stop to the sale of these products.’

Thankfully, they promptly did.

(H/t @Kelleyk43) Maya Dusenbery is an Executive Director of Feministing.

Adidas said the shirts would not be sold anymore, adding in a statement that they were from a limited edition that was only on sale in the United States.